Methods such as each that invoke a block of code repeatedly are often called iterators because they iterate over the objects in a collection. Something cool about Ruby is that it defines an each method on built-in collection classes such as arrays and hashes.

1. Iterate Through Arrays and Hashes

We'll start by iterating through an array since you'll end up doing this 1.upto(infinity) times in your career as a Ruby programmer.

Returning to our frequent flyer program (open your existing flyer.rb file), we currently have an array of five flyers. Let's do something with them...

Thank you for flying the friendly skies.™ Keep climbing!™ Nonstop you.™ :-)

The full solution for this exercise is in the each directory of the code bundle.

If you want to take things up to a higher altitude (sorry, we couldn't resist), combine your two iterators to print out the miles each flyer would earn by switching to each airline.

Here's the marketing pitch you're aiming for:

We've now used a number of iterator methods such as times, upto, and each as a way of learning about blocks. Whenever you need to loop through the elements of a collection, use an iterator method and pass it a block.

Here's a visual overview of what we learned in this section: 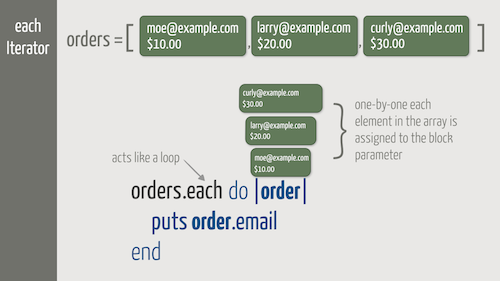 We've barely scratched the surface of the methods in Ruby that take a block. Next up, we'll begin to explore the methods of the Enumerable module and use blocks to select, reject, detect, and partition collections.