Welcome to your first exercise! We're delighted to have you along for the course.

This exercise will help you get everything set up on your computer so you're ready to start writing Ruby code in the next exercise!

If you've taken our Ruby Programming course or you've previously done some Ruby programming, then you already have Ruby installed. If for any reason you need a fresh install of Ruby, check out our Ruby installation instructions.

We'll wait right here for you...

We trust you already have a favorite editor at the ready for writing Ruby code. If not, we recommend using Sublime Text as we do in the videos. Sublime Text runs equally well on Mac, Windows, or Linux. And because it's natively compiled for each platform, it's fast! You can try out an unlicensed, fully-featured version at no cost for as long as you like. And if you end up liking Sublime Text as much as we do, it's well worth supporting the development by buying a licensed copy for $70.

You might want to go ahead and download our Sublime Text Shortcuts PDF (Mac, Windows) for reference as you work through the exercises. It's a cheat sheet of the most common keyboard shortcuts you may see us use in the videos.

To keep things organized, let's create a directory to hold the Ruby files you'll create during this course. We'll also create a starter Ruby program file and run it, just in case you need a quick refresher on how to do that. 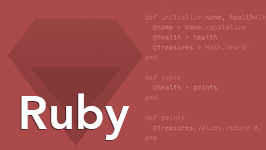 If you're new to the Ruby programming language, consider taking our Ruby course before you start this in-depth course on Ruby blocks. You'll learn all the fundamentals of the language and object-oriented programming while writing a full-featured Ruby program step-by-step from start to finish. Once you're comfortable with the basics of the Ruby language, you'll be in a much better position to master Ruby blocks.

When you hit the big green button below, you'll go directly to the next video in the course where we'll start writing Ruby blocks. You're certainly welcome to code along with us in the video if that helps you learn, but feel free to simply watch the video. Then, after watching the video, you'll find a corresponding hands-on exercise where you get to apply what you learned in the video. The exercise breaks down everything we did in the video in a step-by-step format with hints and solutions.

Let's jump right into it!