Blocks in Ruby are simply chunks of code between braces (single-line blocks) or between do and end (multi-line blocks). You can't execute a block of code directly. Instead, you must associate a block with a call to a method. When the method runs, it turns around and executes the code in the block. Depending on the method, it can also pass parameters to the associated block.

Now that you've seen blocks in action in the video, it's your turn!

Ruby has a number of built-in methods that take blocks. So let's begin with some basic blocks to warm up the fingers...

Warmed up? Perfect! Here's the take-away: Although you attach a block to a method, the block is not a method parameter. The method and its parameters are totally separate from the code block. We'll see how methods actually call a block a bit later.

Let's apply what we've learned about blocks toward something a bit more realistic. Suppose you're developing a frequent flyer program. To keep it simple for now, each frequent flyer has a name, email, and number of miles flown, which is represented in the following Flyer class:

Notice that the class defines a convenient to_s method that returns a formatted string representing a specific flyer.

All the exercise solutions, as well as the example code we write in the videos, is available for download in the code bundle file (right-click to save). No peeking until you try! When you unzip the file, you'll end up with a directory called pragstudio-ruby-blocks-code. Inside that directory, you'll find two sub-directories: exercise-solutions and video-code. And inside each of those directories you'll find code organized into sub-directories matching the names of the course modules.

The full solution for this exercise is in the block-basics directory of the code bundle.

Take a minute to review the main concepts you've learned in this section, and let them sink in before moving on.

Suppose you wanted to continue doing five repetitions of each exercise, but counting by 2, starting with 1 and ending with 9. (It's a new fad in exercise, trust us!) In that new regimen, here's the output you're looking for:

To do that, we need to introduce you to a new method. Similar to the upto method, Ruby also has a step method. It takes two parameters: the upper limit and the step interval.

Give it an honest try before looking at the answer!

So now that you've been around the ol' block (sorry, that was lame), you now know how to:

Here's a visual overview of what we learned in this section (click to enlarge): 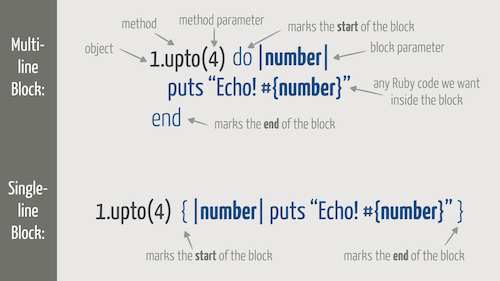 For quick and handy reference, download all the cheat-sheet summaries in a single summary PDF.

Everything from here forward builds on this basic foundation! Next up we'll use blocks with another iterator method: each. It's super powerful and you'll see (and use) it extensively in Ruby and Rails.