You'll find the completed example in the 1-button-clicks-end branch of the code bundle.

In the video we created a LiveView LEEx template using the special ~L sigil. LiveView 0.16 introduced a new HEEx template which is created using the ~H sigil.

Don't worry: Both types of templates are fully supported in LiveView 0.16. However, HEEx templates have several advantages including compile-time validation of the markup in the template. So it's worth using HEEx templates on your own projects. And the good news is that it's relatively easy to migrate from an LEEx template to an HEEx template.

Most of the time, you just need to make two trivial changes:

In subsequent notes we'll highlight any special cases when it comes to HEEx migration. And in the final_app_v0.16 directory of the code bundle you'll find a version of all the course code updated for LiveView 0.16. But we recommend sticking with LEEx templates as you go through the course so you can focus on the core concepts.

You might be wondering how we created the Phoenix app we started with in the 1-button-clicks-begin branch. We generated it using:

Then we tossed in some images and added TailwindCSS with some custom CSS to give the examples a more polished feel. Other than that cosmetic stuff, the code in the 1-button-clicks-begin branch is a standard Phoenix app.

Creating Your Own App

If you'd like to create your own app that has the same CSS styles and images as the live_view_studio app, here's how you'd go about it:

And that should give you a baseline application with all the images and styles in place matching what you'll see in the course!

As you saw in the video, you write LiveViews using the Elixir programming language. If you're new to the language, learning LiveView might feel like someone tied your shoe laces together and asked you play some hoops. 🏀 🤕

Imagine knowing Elixir so well you can drive to the basket and dunk! That's what you'll be able to do after our Elixir and OTP course.

We start with the basics and leave no stone unturned as we build an app step-by-step from scratch. And the second half is all about OTP, so it's like getting two courses in one. You'll come away with the clarity and confidence to jump into LiveView!

You can start the course for free today. We think you'll love it so much you'll want your own lifetime copy. Thousands of other folks have. Use coupon code LIVEVIEW to save $15. 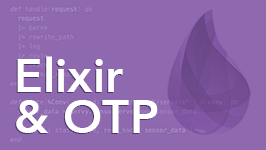 Exercises and Modifying the Code

Throughout the course we'll suggest exercises to apply what you learned in the videos. You might also decide to make your own modifications to our code. By all means, tinker away!

You have a couple choices as to where you make those modifications.

One option is to change the code in the Git branch of the local repository that's included in the code bundle. For example, you could make changes in the 1-button-clicks-end branch. However, when you switch to the 2-dynamic-form-begin branch (coming up next), any changes you made in the 1-button-clicks-end branch won't come along for the ride. To integrate your changes, you would need to merge them into the 2-dynamic-form-begin branch. And every time you switched to the next branch, you would need to merge your changes from the previous branch.

Another option is create your own separate repository that includes your exercise solutions and modifications, and copy over files from the code bundle repo as necessary. In this scenario there's no need to merge branches as you'll likely just keep everything in the main branch.

Both options have their pros and cons. Which one you choose is a matter of personal preference. But it's good to have a game plan because here comes the first exercise...

Exercise: Light Me Up!

Add a "Light Me Up!" button that when clicked sets the brightness to a random number between 0 and 100. Try doing it from memory before peeking at the answer for guidance. 😉

Now you may have noticed (as @jaimeiniesta did) that you can continue to turn the light up even after it's reached full brightness. Same with turning it down even when it's already off.