Remember, the way forms work is a two-part story. The first part is all about displaying the form. The second part is about what happens when you enter information in the form and submit it. The form data needs to get sent back into the app so it can be saved in the database. To handle that, our app needs another route and a corresponding action. By convention, that action is called update because we're updating an existing record in the database. Once the movie has been updated, we'll redirect the browser to the movie's show page.

If you like diagrams (can you tell we do?), here's our goal: 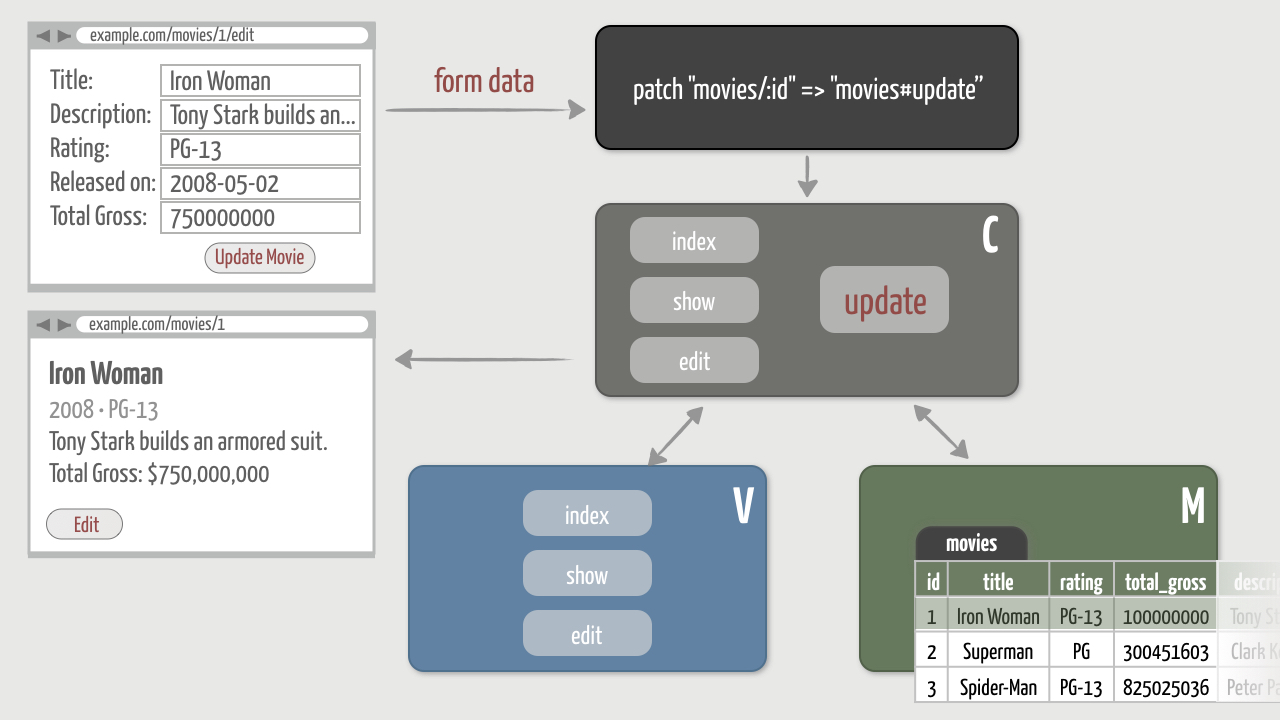 Let's jump right into it!

Let's try submitting the edit form and see where it leads us...

Taking that subtle hint, we need to define the update action in the MoviesController. The update action needs to pick up the submitted form data from the request in order to actually update the movie in the database.

3. Redirect to the Show Page

OK, so what should we do after the movie has been successfully updated? Well, it stands to reason that the user would want to see the updated movie's details. And lo and behold, we already have a show action that does that. So let's just redirect the browser back to that URL. That will force the browser to send a new request into our app. The new request will be a GET for /movies/1, for example.

In the update action, after the movie has been updated, redirect to the movie's show page.

Then submit the form one last time! This time the movie should get updated in the database and you should get redirected to the show page where those changes are reflected.

And with that, our two-part, edit-update story comes to an end. Nicely done!

The full solution for this exercise is in the forms-edit-2 directory of the code bundle.

Where Did PATCH Come From?

Folks often ask how Rails knows to use the PATCH verb when updating data. The answer lies in the HTML that was generated by the form_with helper. View the page source of the form and hone in on this part of the HTML form:

The relevant parts here are the action and the method. The action says that submitting this form will send the data to /movies/1. But remember that the router recognizes requests based on both a URL pattern to match and an HTTP verb. So the method attribute in the form specifies the HTTP verb to use. By default, forms are submitted with the POST HTTP verb as indicated by the value of the method attribute here.

Ah, but the plot thickens: By convention in Rails, POST requests are used to create things. But in this case, Rails knows that we're trying to update a movie, not create a movie. And by convention in Rails, PATCH requests are used to update things. So Rails effectively overrides the HTTP verb by adding a hidden field named _method with a value of patch. (It has to fake it with a hidden field because web browsers can't natively send PATCH requests.)

Anyway, that's where the PATCH comes from. Do you need to understand all that before moving on? Nope, not at all. Sometimes it's just comforting to know what's going on behind the curtain.

What Does a Redirect Do?

It's important to understand that when we submit a form, our application actually ends up handling two requests: a PATCH request and a GET request. Let's take a minute to follow those requests in the server log when you submit the form.

The first request you see is the PATCH that's handled by the update action:

So the browser issues a brand new GET request for the updated movie, and we see the second request come into our app:

The result of that request is to render the show view template. After doing that, the app sends the generated HTML back to the browser with a 200 HTTP status code which indicates the request was successful.

By following the PATCH-Redirect-GET pattern, we prevent duplicate form submissions, and thereby create a more intuitive interface for our users.

Spend some time watching the server log, and all mysteries will be revealed!

Congratulations! This was a big step that put together a whole bunch of concepts we learned earlier, and a few new ones. So make sure to reward yourself with a well-deserved break and a tasty snack!

Here's the thing about forms in Rails: They're actually quite elegant once you get comfortable with the conventions. The conventions really do save you time once you grok what's going on, but initially they can feel overwhelming. It's best to start with a simple form and use the errors (and server log) to trace through what's happening at each step. By about your second or third form, everything will click. It just takes some practice to get the hang of it. And that's what this exercise was all about: practice!

Speaking of practicing with forms, in the next section we'll bring all this together again so we can create new movies in the web interface. That'll give us a good opportunity to cement what we've learned about forms and their conventions.