Oops—we forgot a few fields when we created the movies database table! In addition to the existing fields, a movie could also use a textual description and the date it was released. So we need to modify the database, and that means it's time for a new migration!

Migrations are used not only to create database tables, but also to incrementally modify them. Indeed, almost any modification you can make to a database using an admin tool or the database's native language can be done through a migration. The benefit of using a migration is you end up with a more repeatable (and automated) way for everyone on the project to keep their database in step with the code. And since migrations make it easy to add or change database columns later, we can quickly adapt to new requirements. You'll end up creating many migrations while developing a full-featured Rails app, so it's good to get more practice with them.

Here's what we need to do:

Notice that adding fields to the database has a small ripple effect. This is fairly typical, and it gives us an opportunity to learn how to realign things. It will also help reinforce a few things we learned in previous exercises.

Here are the changes we'll make (in red): 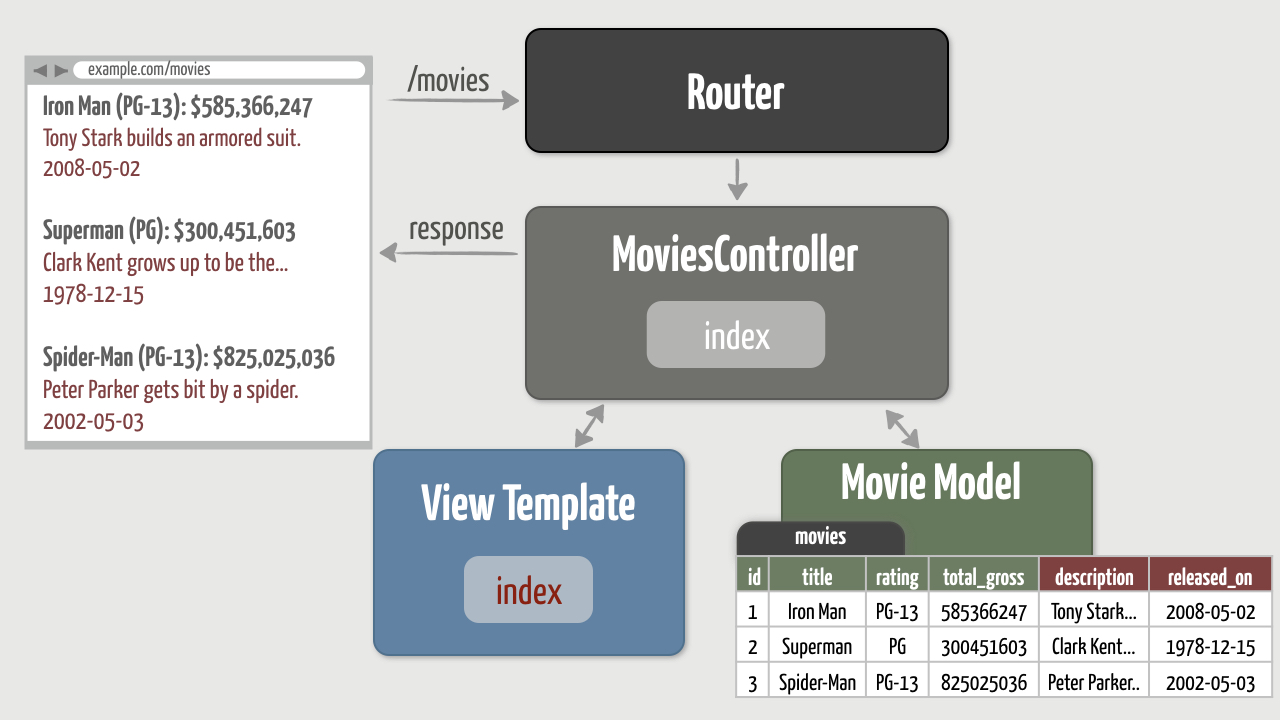 So let's jump right into it...

First, we need to add the following columns and types to the movies database:

Note that we're using a date type for the released_on field rather than datetime as we did for events. It makes more sense that a movie is released on a date and an event starts at a date and time.

So now we've run two migrations. The first migration created the movies table and the second migration added new columns to that table.

Next we need to update the movies in our database so that they have values for the new fields that we just added. To do that, we'll need to read each movie into the console and assign values to the new description and released_on attributes. And you already know how to do that!

And with that, our database is all set!

The last step is to update the movie listing page so that it displays the new movie fields. You already know how to do this, too!

That completes this feature! We added missing columns to the database and now those changes are being reflected on the movie listing page. It's interesting to note that we didn't need to change the index action in the MoviesController. And that's exactly as it should be!

Remember, the controller is just a middleman between the model and the view. It doesn't concern itself with the details of the model or how the data is displayed in the view. So in this case, because we didn't have to change the controller, we're confident that we have the MVC responsibilities properly divided.

The full solution for this exercise is in the migrations directory of the code bundle.

Any time you have to make a change to the database, think "new migration." Missing a column? Time for a new migration. Need to delete a column? That's another migration. Want to rename a table or column? Yup, migrations can do that, too. In fact, we'll talk even more about migrations a little later in this course.

Indeed, creating new migration files is really common. A typical Rails app will end up with tens, if not hundreds, of migration files where each migration represents an incremental database change. On team projects, all those migration files get checked in to a version control system as part of the Rails project. Then, whenever someone on the project checks out a version of the application, they can get their database schema in sync with the code simply by running rails db:migrate. That's the beauty of migrations. You end up with an automated, repeatable way to make modifications to the database.

OK, so now that we're showing more information on the movie listing page, it looks like we could use a bit of formatting. We'll tackle that using view helpers in the next section.

We'll write a couple more migrations a bit later in the course so you see them used in different situations. To learn more about migrations, refer to the Rails Guides: Migrations.