In the previous exercise, we brought our web app to life in the browser using a controller and a view. In this exercise, we'll turn our attention to the model with the goal being to store movies in the database.

The objectives of this exercise are to:

In the end we'll have a Movie model that we can use to create, read, update, and delete (CRUD) movies in the database. Here's visually what we want: 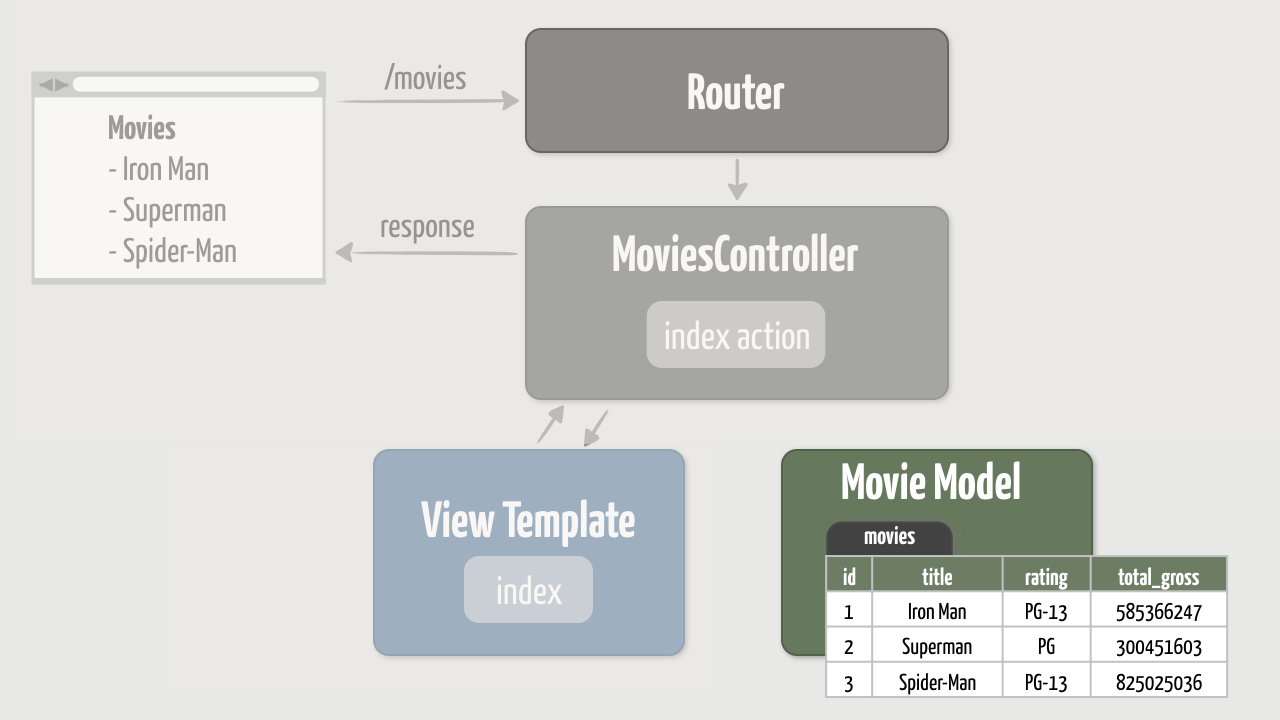 In the next section we'll actually connect the model to the controller, but that's getting ahead of ourselves. First things first.

In Rails, a model is simply a Ruby class that lives in the app/models directory. The role of a model is to provide access to application-level data and encapsulate the application's business logic. Although it's not a requirement, most models in a Rails app are connected to an underlying database since that's where application data is typically stored.

Up to this point we've been representing a movie simply as a title string. Now we want a movie to have three attributes: a title, a rating such as PG, and the total gross (in dollars) the movie has earned. So we'll represent the movies in the database with the following fields and types:

To do that, we'll need to create a database table to store the movies and also define a Movie model that accesses that table. Sounds like a lot of tedious configuration work, right? Thankfully, Rails takes all the grunt work off our hands.

In the same way that we used a generator to quickly create a controller in the previous exercise, we'll use another generator to generate the Movie model and the instructions for creating the corresponding database table. And by following a simple set of conventions, Rails lets us avoid any configuration. It's another example of "convention over configuration."

OK, so we've generated the instructions (migration) for creating the database table, but the generator doesn't actually carry out the instructions. To do that, we need to run the migration.

Now that we have the movies database table and a Movie model, we can use the model to create, read, update, and delete movies in the database. We don't yet have a web interface for these operations, so we'll use the Rails console in the meantime. The console lets you interact with your app from the command line, and you get instant feedback without having to launch a browser.

Let's start by putting a few movies in the database...

OK, now let's take what we learned and apply it toward putting a second movie in the database. We'll do it slightly differently this time.

Let's try that again, this time doing it all in one fell swoop...

Now suppose we need to update a movie's information in the database. We can use the Movie model to do that, too.

Finally, we might want to delete a movie from the database. Again, the Movie model inherits methods that make that really easy.

The full solution for this exercise is in the models directory of the code bundle.

Poke Around in the Database

Running the first migration automatically created the database in the db/development.sqlite3 file. Bear in mind, you generally won't need to interact directly with the database. Instead, you'll use a model to access the database as we've done in this exercise. But just to better understand what the migration did for us, we'll grovel around in the database for a moment.

Now you can easily create, read, update, and delete (CRUD) movies in the database! That's pretty exciting. It may seem like we took a lot of steps to get here, but look back and you'll notice we didn't do much typing and we were able to:

That's the power of Rails conventions. Initially, all the conventions can feel quite magical, and even confusing. But once you get comfortable with them, the conventions make things go a lot smoother.

In the next section we'll connect our Movie model to the MoviesController so that the list of movies in the browser reflects the movie information in the database.